The Fiction lords and The Creators

Multiple times, but always come back

Multiple places, but always come back

Abomination sans was created when he lived in a Hyperverse. Then his home was destroyed when Destruction killed his family and friends, promptly Destroying the Hyperverse. Then Abomination entire body was glitching and it changed his entire personality. Abomination is now a dimensional that is danger to all verse and Other Dimensions.

He wears a red jacket, along with glitches on his body. His skin is blue and he wears a pair of red glitched shorts, along with black slippers. He can change his appearance to hide his identity.

Destruction: Abomination and Destruction are Archenemies. They both hate each other a lot, Destruction have fought Abomination over 100 times and they have been enemies for almost 2000 years.

Devourer of Gods: Abomination is good pals with Devourer for a very long time. They like to work together against their enemies like the rest of the fiction lords, Abomination does see him as a true friend. 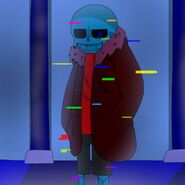 Made by Dark Suicide 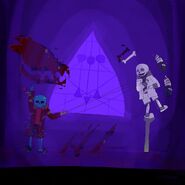