god of corruption and destroyer of multiverse

THIS CHARACTER IS NOT CANON TO ALPHATALE

Alpha Corruption Sans is a failed but powerful experiment made by Infinitey Code.

During Alpha Corruption Sans travels, he discovered how much he really hated being around other people and decided to never have friends, resulting in him being cold and lonely with no sense of compassion. Alpha Corruption Sans now lurks in the multiverse plotting and scheming his ascent into ultimate power and hopes to dethrone Infinitey Code but for now, he needed to play good soldier in order to gain power within Codes group.

When he is angry and getting really serious, his left eye will have red lighting pupils.

Alpha Corruption Sans is a person who believes the Multiverse is an imperfect flaw that needs to be corrupted and demolished. He is extremely cruel and reclusive in nature and values privacy and being alone above all else, if he his denied being alone he will mercilessly slaughter those who are bothering him in a cruel painful fashion with no sense of remorse. Only a few beings Alpha Corruption Sans will tolerate would be Infinitey Code, Infinitey Code Servants, usually Virus404, and the Empty Ones he creates. Other than these few, Alpha Corruption Sans usually discards any other person. Alpha Corruption Sans despises love and kindness and believes such things like “friends” are useless and meaningless concepts, for allies, slaves, and acquaintances get the job done more efficiently without any need for personal connection. When Fighting, Alpha Corruption Sans prefers to use slaves to fight for him or indirectly fight in some matter. He offers no support in battle and usually will make smart snarky comments behind allies and slaves backs

Alpha Corruption Sans can Manipulate and Create primal darkness, the very beginning form of evil dark energy. This ability is extremely potent and powerful, it will allow the consuming of whole AUs and OCs

Alpha Corruption Sans may choose to shoot a powerful glitchy beam from his index finger. Those hit by the beam suffer 9,999 points of damage and become immobilized.

These strings can be used by tying up Alpha Corruption Sans's enemy. Then Enemy become immobilized.

Alpha Corruption sans can summon six eyed gaster blasters. These blasters unleash a blank white beam and make absolutely no noise whatsoever. Anything that hits these beams immediately die as every ounce of coding in their bodies are corrupted and disorganized beyond repair

Alpha Corruption Sans can use a normal-looking bone attack. Those who are hit by this attack immediately loose random memories and suffers from temporary short term memory loss, along with extreme lightheadedness and a painful migraine that will not end until cured by a form of coded ability. If these bones continue hitting someone the affects grow more and more painful until they crack the targets mind and leave them brain dead. Each individual bone deals 10 points of damage.

Alpha Corruption Sans can warp himself, others, structures, landmasses, or attacks to wherever he is familiar with in the Undertale Multiverse. This ability at times can become VERY annoying.

Alpha Corruption Sans is able to teleport what Au he wants.

Alpha Corruption Sans can cause the trust of the victims to turn against their loved ones which causes betrayal and disorder among them.

Alpha Corruption Sans can control his own shadow and other people shadow within the radius of 40 meter ( Example : make someone walk to his position by manipulate their shadow; extends his shadow in length, creating a large shadow field under the targets, which are then pulled down into the shadow;...etc)

Infinitey Code (The Ultimate Enemy of the Undertale Fandom)(Creator)

The empty ones are horrifying parasites created by Alpha Corruption Sans. they appear to be 7 foot tall static creatures that swirl and move like fire, they have to black holes for eyes and a constantly grinning demonic toothed smile. 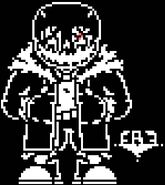 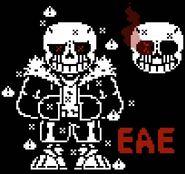 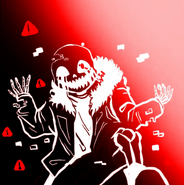 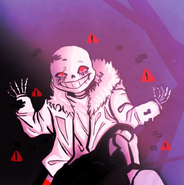