Godverse Wiki
Register
Don't have an account?
Sign In
Advertisement
in: Powers, Abilities And Magics Can't Be Stolen, Drain And Copy, Destroyer, Killer,
and 28 more

HAHAHAHAHAHAHAHAHA! Those runts really sealed the deal here huh? Look at ya! I won't be able to break sweat against you now from the other's assists.. the time you played out upon this or any place for that matter has already failed in a blink of an eye... the path you walk on is crumbling to your final convulsion resentment... You and your pathetic narrative lifespans are becoming yesterday's news... you're day's are over! YOUR STORY HAS FINALLY STARTED ITS ENDING...!!!

No Backstory, The Complete Summary.

Despite any knowledge on the whereabouts, he knows all the verses that exists and verses that doesn't..? Black Mirror will quite often prove more than what you reflect upon him and the act for others on their side or not, of course these are just some not-so-friendly reminders to those who dare observe or come up against Black Mirror but he'll leave a fight if they wish to not be combative, he'll continue to terrorize as he does instead since that'll do. Black mirror has already have their own self agendas and close watch around things and sorts of people very specifically. People who describe Black Mirror are all just results of how he see's them and who they see him as nothing becoming something. Near its end, not every villain have to contruct to their own backline history, a villain is simply just evil and a hero is just good.. just is a term of desires to literal defined. Now that's out the way, whatever happens next is totally up to Black Mirror and his motives... whenever he see's something that is somewhat useful for himself and crew mate's, Black Mirror will act to either take it by force or steal it for themselves the people on his side. As of now, he decided that it was time to head out into the Fandom to show that even someone so significantly small can reach into their deepest depths of their goals of becoming mere than just multiverses, but into the True Godverse, he finally declared himself an Emperor Amongst all Thieves(E.A.T), identity thefts within the entirety of the UT Fandom.

" Its a story of a being, who has enough strength to shake the whole entire fandom upside down. "

There's not too much to know about myself, he's just curious about other author's within the Undertale fandom. "I just wait for the perfect moment to strike enemies knowing if the situation goes my way." A devilish mercenary and almost completely somewhat chaotic. Other than that- manipulative & cocky, believing that Power is all and nothing else..

Black Mirror DOES NOT have a beard illogical that may be sicne it is, the jawline creates some sort of horns that grow within only the center top head of the skull of his and out sideways too. What you see here are representative of the major growth over time now, the horns are cosmic space, shooting stars, some kind of void lights or little glow up stars all flowing in the same directionless pattern. Like a gif, showing stars moving around in space so easily, like if there was an entire galaxy within it or something inside the darkest cosmic. His clothes will appear different during each time he receives joy on themselves and taking it further of havung thr feeling of dresding good to show off towards others on the spotlight. For now, the white fur image (for a shortened example) will be it's display as of now, so on and so forth(The black fur is what you will see soon but is replaced by whiten). The golden ring stays on his nose. As of his teeth, being deformities dentures. The hat shown is from Cuba military stolen up on the surface from any Au he sat off too. Although Black Mirror doesn't have to obit to this form, they'll decide to redesign themselves anyway shape or form.

• Thievery - Absolute Thievery. (Black Mirror has been working his way up to reach this potentially highest pinnacle of power serectly.. It has finally paided off)

• Infinitey Code (The Ultimate Enemy of the Undertale Fandom)

• Black Mirror is a mixture of a coward and bravest but not like a soul type, just inbehavioral moment's

• Doesn't have an opinion on TG, just wants to rule it like everyone else.

• Traveling several plains of existence an along with au's, and the like of verses isn't going to be an issue for him at all since Black Mirror is a ■■■■■

• Black Mirror doesn't consider himself an Emperor until he becomes one of the greatest, for now.. a terrorist(The reason why they're called a Emperor now is to catch the viewer's attention right on the spot).

• Enjoys eating, drinking, sleeping, chatting, having human like behaviors. Even though he doesn't feel the need to do so, does it anyways

• Black mirror is currently finding multiple Godverse artifacts, item's, tool's, that can be useful for the people that aid along himself to reach the top!

• Black Mirror has met the Annoying Dog and so far, they won't want to cause any kind of problematic situations with that thing, so it's better to leave it be... for now.

• Black mirror intends to disrupt the viewer's series and proclaim it as they're own by stealing the opportunity of other's spotlight from them. Which is another way of how they get around True Godverse and other multiverses, undetected as well to get the better advantages. (This is from permissions, planning, asking, credited given straight back to the original people from their hard work in action.) 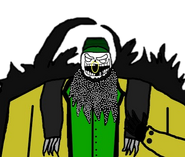 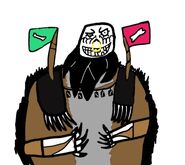 First design of this oc

Community content is available under CC-BY-SA unless otherwise noted.
Advertisement