Godverse Wiki
Register
Don't have an account?
Sign In
Advertisement
in: Characters, Omni-King, Supreme Ruler of the Omniverse,
and 24 more

Omni-King of the Omniverse

Ruler of the Gods in the Omniverse(Currently)

A member of the Kings of Godverse(Currently)

The Oblivion (As King Omniverse)

King Omniverse Sans is created and owned by Keion15

"gets eaten by the devourer of gods every morning"

He, his brother, and his father lived in an alternate AU.

During The Human-Monster War, Gaster decided Asgore was to merciful to defeat The Humans. So, with the begrudging support of Undyne's Mother, Gaster and The Royal Guard overthrew Asgore. Via Gaster's brutal tactics, the war was won when the humans surrendered.

Gaster lived as The King of The Monsters for a long time, and eventually had two children, Sans and Papyrus. Sans was his successor, being The Oldest Child, and had a different upbringing.

Unlike his brother, who was raised differently, and respected the humans, Sans despised them and would occasionally go with his group of friends to hunt down unsuspecting humans.

One day, while he was off screwing with his friends, his father was assassinated. Sans was of course, enraged, where Papyrus was solemn. It was discovered their remaining guardian had been tasked with telling Sans that his father's research had interesting information.

Sans studied it before his inauguration as King. During his studying, unknown to him, he was set to be married to a human. Normally, this wouldn't phase him. He didn't care about love, thus, couldn't care less if it was arranged, however, had he known, he would've n angered, due to his hatred of humans, especially after his father's execution.

Papyrus was dealing with most royal affairs, while his brother was researching into Gaster's research. Sans discovered about AUs, and given that on the surface, food and water was running out due to twice the residents, he decided to set The Royal Scientist, Gerson, and his assistant, Alphys, on the project.

Shortly Afterwards, he was notified by Papyrus of the arranged marriage, which, and I quote, "PISSED HIM THE FUCK OFF." eventually he calmed down, as Papyrus explained the purpose of the marriage, to calm the war between the species.

Then, Sans was inaugurated as King. He prepared for the arranged marriage, as he had to deal with with his responsibilities. Then, the marriage occurred, in which, both of them treated it rather awkwardly out of the situation. Afterwards, Sans returned to his palace along with the human, which he barely even remembered the name of. Afterwards, he learned their name was Chara, and that they were rather closed off.

Sans took some note of this, but didn't care. Gerson sent some notes back to Sans, and Chara felt rather depressed due to his lack of interaction with them. Eventually, as Gerson took on a role of Father Figure to Sans, and Papyrus was forced to do many royal duties along with Sans. Eventually, Gerson was able to kindle at least some mutual friendship between Sans and Chara, despite Sans's defiance.

Eventually, Sans agreed to do the ritual of everlasting. In where as he gave Chara some of his DNA, so that they wouldn't age, as Boss Monsters do. His refusal to do so up to this point was surprising, but it went as planned, and restored some of Chara's youth they had lost over the years. Eventually, after the fact, they sparked more of a romantic relationship and created a child.

However, Sans's research had gotten dangerous, and Gerson warned him of this, but Sans continued. Sans wanted to help his people, as their lives had gotten slowly better over time, but if resources ran out, that'd all fail. So he tried to activate the machine that would bring him to another AU, as he found that any form of skin wouldn't work on it, and he didn't want to risk his brother's life.

He was sent out of his AU, into the realm known as The Oblivion. There, his life was almost sucked away, but he was saved by a Godlike figure that called itself "4th Breaker." This entity said for messing with reality, he was banished from his AU and Sans could never return, however, that his abilities as a ruler were appreciated, and thus, he gave him a small amount of his power, and made him into a king of The Omniverse. Then, 4th Breaker Froze his AU in time, and told him unless King Omniverse could finally put The Multiversal Shenigans within his Omniverse to rest, then he could never return to his AU and it'd be stuck in frozen time forever.

He wears a purplish-blue jacket. He has a gold crown on top of his gray hoodie along with a gray shirt, he has a right blue eye and a left pink eye. He also has a long galaxy scarf around his neck and with a black pair of pants, he has pink slippers along with blue socks.

He has something of a short fuse. He despises having to repeat himself, and hates talking to most humans. He isn't good friends with the other "Gods" of The Omniverse, and actually flat-out hates them, so he will often either kill ones he hates, or just beat up and berate the ones he doesn't like. Outside of his treatment of Gods, he's actually a rather intelligent and fair ruler, and his former relationship with Chara caused him to respect humans more, even if he doesn't like them, hence why he doesn't torture them as he does The Gods. He hates 4th Breaker with a passion, as he blames him for putting him in his position. Despite having a lot more wealth and power than his old position, he absolutely despises his current position. However, he does respect wiser entities, as they remind him of his father or Gerson.

Omni-Restore is one of King Omniverse's closest friends. He is really close friends with Omni Restore and OmniGodity, he trusts them a lot, they also work together very well. He known both of them since he became king of the Omniverse. KO, Omnigodity, Omni-Restore and Cozmo are great friends and they are always together. KO asked Omni-Restore to always help him with close decisions.

He is the only person other than The Creator that Omniverse fears. He has been told by 4th Breaker that Infinity is out of his reach, and he is not to trifle with him. He hates, but also deathly fears Infinity Code. King Omniverse and Infinity Code have encounter each other many times, to this day KO still despise Infinity Code with a burning passion.

King Omniverse was the first to beat Omni404, and by far, Omni404 hates it more than the other members of the omni team. Omni404 can't stand it, and while they often work together and on missions as a couple they are exceptional, they tend to talk very little, and have quite annoying opinions about each other, even though it's not hateful. 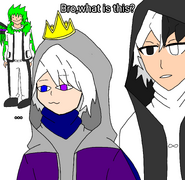 Made by It's me Alex 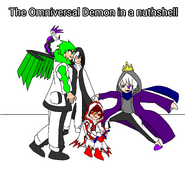 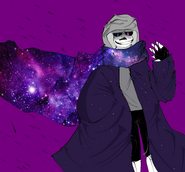 New Design Made by Truly Salty 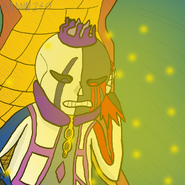 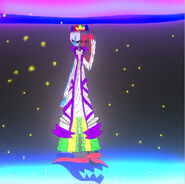 Made by Fans sans 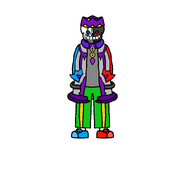 Made by Dust www www 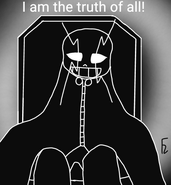 K.I.N.G Form Made by Godity FX 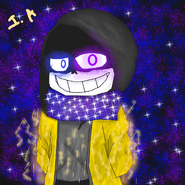 King Omniverse's Sprite Made by a Unknown Artist

Made by Dark Suicide
Community content is available under CC-BY-SA unless otherwise noted.
Advertisement