Godverse Wiki
Register
Don't have an account?
Sign In
Advertisement
in: Satire, 4th Wall Breaker, A being with full control over the Omniverse,
and 209 more

betond Infinite
So, this is power? Probably we should have try this before - gods talking by meta godity

He is a temporaly fusion that last only some second, he is the fusion of the following character

His power is incomprehensible to say the least, he even surpasses many op characters like Alpha404 by hundreds of times, and for some unknown reason even surpasses the 1% barrier of King Godverse, he is considered the only one capable of doing so, and there is no actual explanation for this.

They are childish and energetic most of the time, But they have multiple personalities. Furthermore, they are not just a single person. Meta godity in fact is like Everything sans in some way, even if he is not even close to his 0,000000000001%, but he is considered a alive being

He can shapeshift but he mostly has features of other gods. His left eye belongs to corrupted core sans purple like his right eye shatters the reality and the shards can be seen getting out of it just like 4th breaker. He has 3 red wings like glich504, has a rainbow on his back from Omni!Creation his torso belongs to infinity code he is longer than a normal sans, about Echo!Sans' height. His head is surrounded by orange and blue aura from omni-breaker

He has a mix of abilities of every god who fused to become him.but a lot more powerfull and all of their forms.he can use their last resorts that will kill them ext. while eating cereal.every form and power and last resort of them are easy as thinking to use for him.for example lets look at Omni!Sans's zeus thunderbolt.he can spam it but it is like inf times more powerfull(since he also has omni trough everyone stronger then ink being in it)

He can use Omnipotance at full capacitity, enoght to manipulate reality and change concept

Gaster Blaster with components of all the Gods

Bones but with components of all the Gods

These strings are a combination of all the strings in the fusion. As a result, they are so strong they are dark blue and can control or destroy anything and only can be shot from the right eye

Using his strings he is capable of manipulating them like tentacles and when attaching to a being or stabbing the strings into a being multiple times can change anything about the being weither it be stats, their species, their abilities, etc.

If you get hit by one of his attacks, you will start to burn with purple flames, from then you will be judged. Everything you did in your life will give you a + point and a - point. However, if it is 0, normal attack damage will be dealt. There is no karma, but you will be attacked by the same attack power. If the points became -, you will suffer in the worst ways possible for millennia's, but in a millisecond. Furthermore, you will die if it overpowers you. However, if you are fine half of your hp will be dealt 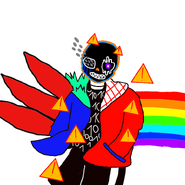 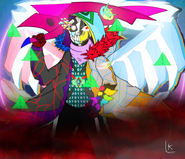 Made by Oidorite
Community content is available under CC-BY-SA unless otherwise noted.
Advertisement