The ultimate creation of the Infinitey Code

Virus404 is one of the proudest designs of Fortran, created due to the rising need for far more capable and powerful servants than what he possessed before. Fortran's entire carefully laid plans to kick Godessa out and reorganize the multiverse were in vain if he let the creators get away with their even more powerful creations, and based on this he decided to create the literal god of viruses to help support him in his cause who he called Virus404.

The twisted doppelganger of Error404 was forged and made to be ravaged and consumed by insanity and total instability. Driving him insane the moment he woke up, though Fortran would implement more than just insanity, he gave Virus404 his entire personality including total unbreakable obedience to Fortran himself. Allowing his strict control over VIrus404 and letting no other control him.

Fortrans would negotiate an agreement with one of the powerful infinity beings to help ‘smuggle’ him into the fandoms, and once inside his hand would quietly guide Virus404s newfound existence into a far away AU named Fallout!Tale. It was perfect for the gods' integration into his new existence, a secluded and dead AU with zero signs of life left for him to bother.

Once Virus404 would attain a level of consciousness here, he opened his eyes for the first time and was confused by where he was and what he was, Fortran at this moment would go about creating a mirage of himself through the AU’s weak barrier through the reflection of a nearby pool and called him over to talk with him.

It was at this point that Virus404 was informed that Fortran was indeed his maker, and was told of his existence as the god of viruses to lead his cause into battle. Virus404 lacked the know-how and ability to question him, he just suddenly grew aware of his situation and had no real way to be his own person at the moment. He was then manipulated smoothly by Fortran into being his servant.

Once Virus404 was convinced of his position, Fortrans' reflection would quietly vanish. Leaving him alone to contemplate and decide his next move. With his newfound intelligence and brilliance, he did one thing any mastermind Virus would do: He threw a taco party. This is the beginning of the utter chaos Virus404 would inflict on the multiverse.

Though Virus404 didn’t care while he was drunk on BBQ sauce. He was having the best moment of his life right now, opening vortexes and dragging random objects to study and explore. He even took the liberty of creating a small roman empire as the planet was slowly being put off orbit. Executing traitors to the crown. Actually, these were people he pulled from random AUs and forced to watch My Little Pony with him until some begged him to stop. All in all, it was a very confusing time for multiple AUs.

The party would go on, the AU was taken out of dead status and made very much alive. Soon hundreds of OCs and residents of AUs were trapped in this strange new warped reality. Where an insane mass executing manga-loving brony was raining total and absolute chaos. Doing things from growing into a massive celestial body and playing pool with nearby solar systems to inflicting total genocides on anybody with their first letter in their name starting with B for a short while (He justifies his decision by claiming Jerry made him do it. Jerry's reasons are beyond understanding.) The only time the party was stopped is when Virus404 randomly grew bored, and annihilated the entire AU, kicking him out into a new universe as all of his party friends were annihilated by the sudden destruction (Besides Jerry, it stays on his hand).

It’s important to understand that when something happens, it might bother him. It might not. It all varies upon his mood for the evening. Nothing is really a constant except for these things: Genocide, Tacos, Manga, My Little Pony, Slaughter, and his liking of food. Anything other than these topics might or might not change over time. Though, anyway, his backstory.

Virus404 took a seat in his new AU called Rescue!Tale and decided to explore and test what he can do for the fun of it, expanding his consciousness into multiple bodies like froggits and other lesser monsters of this underground. He would slowly replace all monsters with his mind. Controlling everything into his own personal soap opera. Along the way, in his campaign for expansion, he did come across evidence of Error404s existence. Immediately taking great interest in what he considers the Beta version of himself, it was a very big revelation to him.

The said revelation would make him neither enraged nor completely dissatisfied at being the only 404, no It just made him more excited as he finally found someone he could repeatedly mess with over and over. Like an obsession over a new toy. So Virus404 would proceed to chase him to the ends of the Earth, every time they’d meet, he’d do one of three things; Mess with him, try to kill him, or just sit down and talk about personal beliefs. It was this really unstable relationship of him both socializing and trying to kill him. Mostly trying to kill him. Though this actually would change as a few years passed, Fortrans commands kind of wore him down somewhat. He began witnessing the pop-up of more 404’s which pissed him off to no end and made him realize he was tired of his current name. He slowly came to realize that as a person he wanted an actual name, not some form of statement related to Error404. He grew beyond wanting to replace him and became his own entity.

A little later down Virus404's life, he would later discover the powerful Omni-key for a short period of time. Jack was very conflicted about using it. He found it in the hiding place of Koavires pocket dimensions which remained open during his confrontation with Lotus. Jack, getting his hands on the Omni-Key for a short period of time, almost greedily wiped away most of his weaknesses in an effort to achieve vast amounts of additional power. His authority ascended, which attracted both Fortran and Ada. Ada would immediately rush to snatch away the Omni-Key. Fortran would scream in rage across the Omniverse, as the Omni-Key was capable of freeing him.

It was revealed later down the road that Fortran neglected to mention the potential of the Omni-Keys capabilities to Virus404. It was only until Jack wiped away most of his weaknesses that he understood just how valuable the Omni-Key was to Fortran.

Virus404 is an insane, mentally unstable, homicidal maniac who desires to infect the entirety of the Undertale existence itself to further get Fortran closer to his most desired freedom. While appearing in a physical form as he dwells across the fandom causing mischief and chaos to whatever he touches, always keeping a sort of silly and goofy personality that acts similar to a facade to his more malevolent and evil nature.

Virus404, by all accounts, is totally random and insane. His methods in combat and mannerisms are both unorthodox and highly unpredictable. This is so severe that it leaves even the most intelligent beings completely bewildered and confused. Virus404 is a master at committing unpredictable chaos as he blends and warps between what's possible and impossible. In this, there is no way just to gauge or predict his motives besides the one for setting Fortran free.

When encountering other beings, Virus404 commits a wide array of different actions. The only beings he actually seemingly cares for is his personal community of Virus AUs and OCs which he rules and collects over throughout the vast multiverses.

Virus404 is, definitely, the most powerful and infectious Virus across the vast Undertale Fandom. His numerous abilities allow him to easily infect, corrupt, and outright destroy hundreds of multiverses. His physical abilities are without limit or simply completely irrelevant. Whether breaking the laws of existence to hit absolute infinite in numerical stats, or just simply state his boundless physical and mental capabilities.

Anti-Anti-Virus Bones: The Bones of Virus404 were made to fit within the Sans theme. They deal irrelevant amounts of damage by simply eliminating HP itself in such a way they instantly kill the target(s). These bones also eliminate Anti-Viruses with a single touch.

Boundless Physiology/12D Physiology: Virus404 true being is beyond physical form, and is referred to as also being 12D in existence. His true form is much more far reaching over the multiverses and lower dimensions than anyone guessed. With the entirety of his being so far reaching that Jack himself tethers lightly to entering multiverses in his physical form, as to not disrupt their existences. His 12D form is considered overly powerful even by 12D beings, and maintains him to be the absolute strongest 12D being in existence.

His physiology is boundless and in a higher state of infinity. His speed allows him to transcend instantaneous speeds across the vastness of the multiverse. Not to mention his true state of being can force his presence into an AU and manifest multiple physical forms of Virus404 with no limits.

Infectious Mentality: Virus404 possesses a vast infectious Hive Mind which is capable of infecting unlimited multiverses on an infinite scale. It’s primary function is to both locate other ‘Multiversal Infinities’ and expand on an above infinite level to engulf it. Through this Virus404 can rapidly infect multiple complex multiversal structures and continuously expand his consciousness to essentially become and embody them. Through this his mentality is considered somewhat of a disease, as contact with these infected dimensions via escaping or passing by can basically infect the transgressors mentality with Virus’s own mentality. Utterly this consumes individuals and devours their core being

Telekinetic Godhood: Virus404 possess absolute and absolutely transcendent levels in Telekinesis. Size, matter, efficiency, from rearranging quantum physics themselves to annihilating entire multiverses in reach this is considered to be one of his favorite abilities.

Prime Virus: Virus404 is considered the God of Viruses, and his abilities as a virus acts accordingly. Virus404 is able to establish a mainframe connection with other Virus characters and utilize any Virus-related abilities as part of his canon. His control over other viruses is considered unchallenged and unmatched by all known standards. With a unique arsenal of virus-related abilities Virus404 has a plethora of options to choose from when attacking in a singular form or when he utilizes his infectious hive mind.

Null Zone: By telekinetic choice Virus404 negates, and is immune to, all forms of magic and energy-based attacks. His Null zone can be limited to either himself or to whatever multiverse he is currently dwelling

Omega Blasters: These blasters are capable of following and tracing their targets endlessly in all expanses of realities. They break through time and space to endlessly follow their targets and simply erase their existence from history itself. Annihilating the very memory of their victims. These blasters fire blasts that may zig-zag, curve, or even simply accelerate to whatever speed the blast sees necessary. The blasts are learning, and capable of making their own choices. All they do is desire to hit their target.

Unauthorized Administrator: Virus404 is capable of sliding through and bypassing Anti-Viruses and Firewalls at a whim.

Eye of Gods: Virus404 eyes and perceptions allow him to peer through any layer of reality he so wished. They negate cover, temporal differences, spatial differences, physical differences, and can penetrate even the aspects of lies themselves.

Allies/Servants (you may add to this list if you wish) 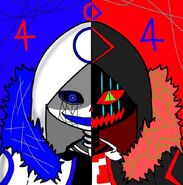 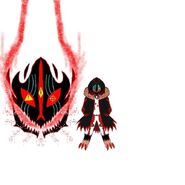 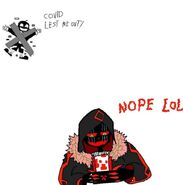 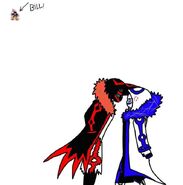 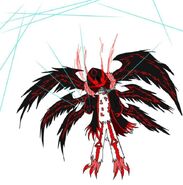 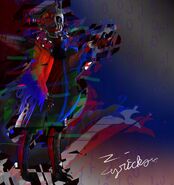 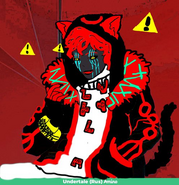 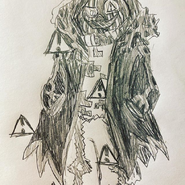 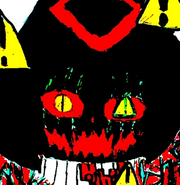 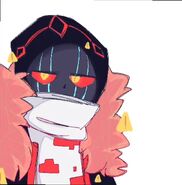 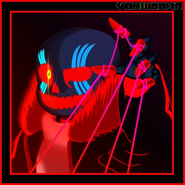 Art by YukiiiSama
Community content is available under CC-BY-SA unless otherwise noted.
Advertisement